The power of the night (Die Macht der Nacht)

In 1989, the two major organizers Rainer Wengenroth and Bonger Voges got to know each other as immediate neighbors and competitors.

After the end of the "Theater Negerhalle", Voges became co-producer of "Die Macht der Nacht" in the Munich Olympic Park in 1990. The special feature of this 6-month guest performance was, in addition to the main event tent (circus four-master), a second smaller tent, the "Theaterzelt" with an accompanying theater festival under the artistic direction of Rainer Wengenroth and Bonger Voges. 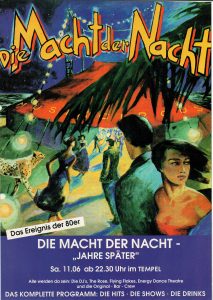 The collaboration continued in Berlin, Paris, Cologne and Düsseldorf.