The former Belle-Alliance-Platz, now Mehringplatz, got its name as a result of the wars of freedom. In a special way he underlined the striving of European nations for sovereignty.

With the installation Path of Visionaries In the pedestrian zone of Berlin's Friedrichstrasse, the adjacent Mehringplatz is given a contemporary interpretation of its historical significance.
"THE PATH OF THE VISIONARIES is the first landmark of the European unification process in Berlin".

Quote: Dr. Gerhard Sabathil, former Head of the Representation of the European Commission in Germany.

In May 2006, under the patronage of Jean-Claude Juncker, former EU Commission President, and Viviane Reding, former member of the European Commission, responsible for the Justice, Fundamental Rights and Citizenship department, the VISIONARIES 'PATH was set up as a temporary installation in cooperation with all EU Member States opened in the form of 1.2 square meters large floor panels in the pedestrian zone of Berlin's Friedrichstrasse.

As a sign of the common values of the cultures, the temporary installation presented quotes from outstanding personalities from the respective countries proposed by the embassies and selected by a prominent jury.

In 2006, 2007 and 2008, the sponsoring association KUNSTWELT e.V. BERLIN organized the EUROPAFESTIVAL BERLIN along the southern Friedrichstrasse and on Mehringplatz for the PATH OF VISIONARIES - SIGNS FOR EUROPE under the patronage of the then Governing Mayor Klaus Wowereit EUROPAFESTIVAL-BERLIN.
The EUROPAFESTIVAL-BERLIN was realized in cooperation with the KMA Antenne Berlin and the embassies of the EU member states in Berlin. We thank our partners and many helpers for the support, especially the representation of the European Commission in Germany.

From 2009 to 2017, extensive refurbishment measures by the BVG continued on Mehringplatz in the pedestrian zone on Friedrichstrasse.

KUNSTWELT e.V. BERLIN, under the direction of Bonger Voges, used the time of the compulsory break due to the construction sites of the BVG to expand the PATH OF VISIONARIES to include all UNESCO member states.

23. June 2011: The General Director of UNESCO, Ms. Irina Bokowa, personally unveiled the UNESCO board for the PATH OF THE VISIONARIES OF THE WORLD at the KUNSTWELT e.V. BERLIN location at Friedrichstrasse 1. The city art project was under the patronage of Ms. Bokowa for the permitted two years. 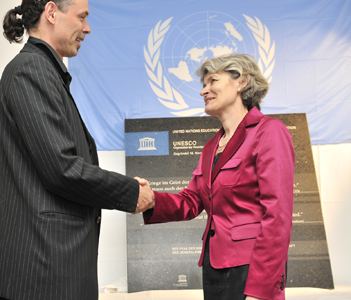 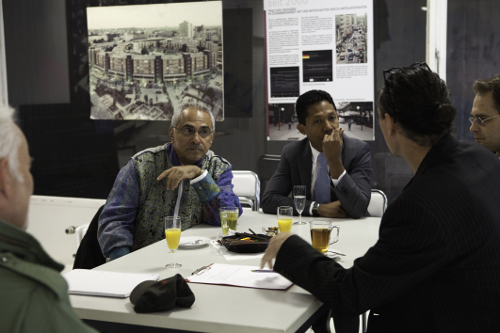 19. October 2012: The Ambassador of the Republic of the Philippines, I. E. Maria Cleofe Natividad, gave a reception at the PATH OF VISIONARIES on the occasion of the visit of a Philippine parliamentary delegation led by Ms. Henedina Abad, the chair of the Committee on Culture and Education. A replica of the Philippine tablet was unveiled, which has found a fitting place in the reception area of the embassy building. 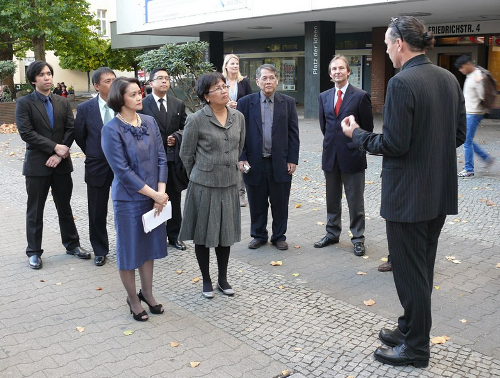 5. November 2012: The Ambassador of Jamaica, I.E. Ms. Joy Elfreda Wheeler, and Ms. Claudia Grotz were guests at Kunstwelt. During the meeting Ms. Wheeler got an idea of the progress of the realization of the path of visionaries. Variants of the German translation of the Bob Marley quote were discussed in a working session. 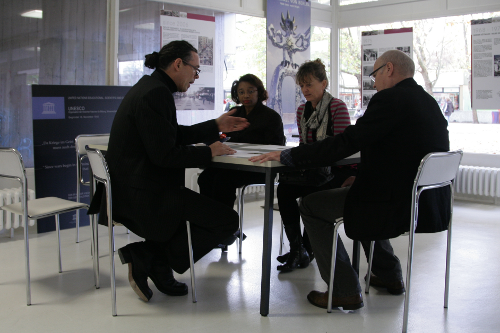 23. September 2013: The Thai poet and philosopher Naowarat Pongpaiboon was a guest at the PATH OF VISIONARIES on the occasion of the handover of the official quote for the Kingdom of Thailand. Mr. Pongpaiboon was accompanied by Her Excellency the Ambassador Nongnuth Phetcharatana, as well as other members of the embassy and Ms. Phiranai Chotikanta, Director of the Cultural Networking Cooperation Group of the Thai Ministry of Culture in Bangkok. 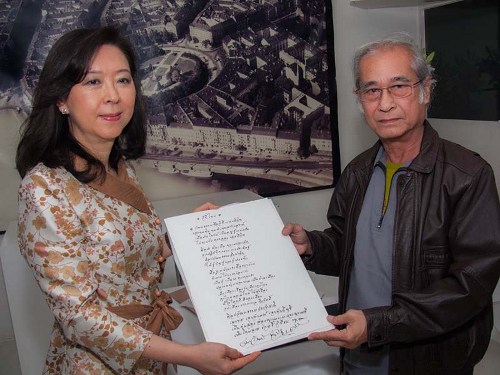 2018Start of construction work to redesign Mehringplatz and the pedestrian zone on Friedrichstrasse.

May 2019: Visit of… Chairman of the Board of the Art Association… in Novisad, Serbia

February 2020: Signing of the contract for the construction of the permanent installation PATH OF VISIONARIES - SIGNS FOR EUROPE between the sponsoring association KUNSTWELT e.V. BERLIN represented by the chairwoman RA Kristijana Penava and the State of Berlin represented by the District Office-Friedrichshain Kreuzberg, City Councilor Florian Schmidt.

October 2021: The opening of the permanent installation PATH OF VISIONARIES - SIGNS FOR EUROPE is planned after the redesign of the surrounding area has been completed.

In the coming construction phases, the permanent installation is to be expanded to include the UNESCO member states. Various locations in Berlin are being discussed, including a continuation of Berlin's Friedrichstrasse to the Oranienburger Tor.